Slackline Productions was founded by Kristin Duffy who has often been referred to as a Renaissance woman.

Kristin began her performing career at the age of two, when she started both playing the violin and standing up on her parent’s radiator, microphone(-looking) object in hand, singing songs from Annie at the top of her lungs.

Since that moment, she has been a fashion designer, Ironman triathlete and triathlon coach, spin teacher, writer, and of course, amongst other things, a theatre maker.

Kristin can’t wait for Slackline and its mighty tribe of strong women to take over the world (‘cause all the world’s a stage, right?! 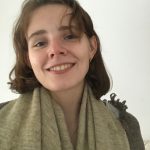 Ivy recently graduated from Fourth Monkey where she began to learn the ropes of forming a theatre company in a practical and creative capacity.

She is very much a theatre maker as well as an actor and is passionate about bringing work to life from all angles of production, especially in such an empowering female-led environment like Slackline, which she feels very excited to be a part of!

Ivy began her creative journey as a dancer before moving her focus more towards theatre, however she still maintains a love for both disciplines which very much feeds into her work.

She likes to think of herself as unlimited by the all too defining boxes of the industry – something she and Slackline have in common! She is devoted to exploring all aspects of the arts and opening up new pathways for people who are somewhat pigeonholed by today’s industry.

Support us (for the price of a coffee- or a month's worth!) and you'll be directly supporting female-led stories and theatre.